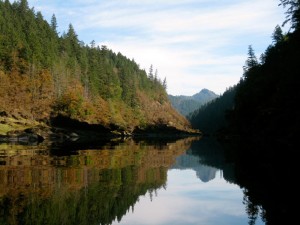 Jet boat tours in Gold Beach, Oregon: The natural environment of the Rogue River Canyon is responsible for our success. Early visionaries enacted the ‘Wild & Scenic’ Rivers Act of 1968, “…to set aside river corridors with their immediate environments possess outstanding remarkable scenic, recreational, geologic, fish and wildlife, historic, cultural or similar values.” The Rogue River was designated ‘Wild & Scenic’ as one the original 8 rivers in the U.S.A. In cooperation with the U.S. Forest Service, Jerry’s Rogue Jets serves as steward of this spectacular resource.

Jet boat tours are seasonal May 1 – October 15 and operate on the lower 52 miles of the Rogue River under the authority of the U.S. Forest Service. ‘Special-Use’ permits, issued by the U.S.F.S, regulate the number of trips that can be run daily on a seasonal basis. Jerry’s Rogue Jets is the only permitted commercial jet boat tour allowed to operate in the Rogue River’s ‘Wild’ section; an area only accessible by jet boating, rafting and hiking. 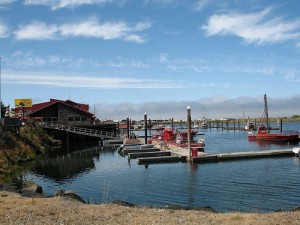 Jerry’s Rogue Jets at the Port of Gold Beach

Jerry’s Rogue Jets and the Rogue River Mail Boats are a careful blend of adventurous jet boating, nature based tourism and unscripted narrated entertainment; all of our captains are veteran boatmen of the Rogue River.

Our commercial fleet consists of 15 U.S. Coast Guard Inspected vessels. Inspections occur annually prior to the beginning of each season. Vessels range in size from 32’ to 42’ long and are capable of introducing 38 to 65 passengers respectively to the Rogue River Canyon. Our vessels have been custom manufactured locally by Wayne Adams of Sea People Manufacturing. (Wayne is a direct decedent of the Adams family pioneers whom homesteaded in the Rogue River Canyon and used the services of the early Mail Boats at the turn of the last century.) Changes in hull design, layout and seating are constantly evolving to meet new safety, comfort and environmental concerns. Horsepower is derived from triple engine, gasoline powered installments using 6.0 L 366 c.i.and 8.1 L 496 c.i. Chevy Marine Engines. Combined horsepower in individual vessels is 1000+. Hydro-Jet technology allows shallow draft navigation and maneuverability through the Rogue River’s shallow rocky environment. Fully loaded jet boats can travel through 8 inches of water. The hydro-jet pumps we use are Legend, Berkeley and Hamilton pumps. Boats can reach speeds of 50+ M.P.H but typically cruise at 35 M.P.H.. Each vessel is equipped with modern sound suppression to reduce river disturbance for all river users. Public address (P.A.) systems mounted internally in every row allow your jet boat pilot to narrate while traveling up stream. Jerry’s Rogue Jets is capable of introducing 800+ passengers to the Rogue River Canyon in a single day. Annually 34,000 passengers enjoy a trip aboard Jerry’s Rogue Jets, Oregon’s only Mail Boat.

Jerry’s and the Mail Boats have grown from humble beginnings to become a world class nature based tourism attraction on the Southern Oregon Coast. During the 1940’s an editor for Sunset Magazine wrote an article about his travels up the Rogue River and set in motion a string of events that have culminated in what is today the Jerry’s Rogue Jets. Awarded the Governor’s Tourism award in 1987, Southern Oregon Visitor’s Association President’s Award 2003, Oregon Business Magazine’s 50 Great Leaders award 2006 and featured on the NBC Today Show in 2007. Our staff and pilots are committed to providing a safe and fun experience while introducing you and your family to the Rogue River Canyon.

In 1990 Jerry’s added a free Rogue River Museum and Gift Shop just across the street from Jerry’s ticket office. The Gift Shop and free Museum are both open year round. Our gift shop is stocked with clothing, Oregon décor, souvenirs and one-of-a-kind items. The museum will provide a glimpse of the rich history that has occurred in the Rogue River Canyon. Follow the time line beginning nearly 250 million years ago with the formation of the Rogue River Canyon to the events of the past and present that continue to shape life along the Rogue River.

Our companies continue to be family owned and managed. In 1972 Bill McNair and Alden Boice purchased Jerry’s Original Jet Boat Trips from Alden’s brother Jerry Boice. Since then McNair has purchased controlling interest. Bill continues to be the driving force behind the scenes insuring a successful and thriving company. Bill’s wife Cherie McNair has served as the backbone of the company for the past 36 years. Both Bill and Cherie are now joined by their sons Scott and Nic McNair who are controlling the day to day business. Their sister Stephanie who lives in San Diego, CA is always on stand-by during the operating season to return home and assume her position as head reservationists.

Jerry’s Rogue River Museum and Gift Shop is managed by Kim Wycoff. Kim began her career with Jerry’s 20 years ago in 1991, fresh out of college and new to the Gold Beach area. Kim is responsible for all aspects of the gift shop business. We are happy to have Kim as part of the Jerry’s family.