Jerry’s Rogue Jets was established in 1958 by Three brothers: Jerry, Alden, and Court Boice. They revolutionized commercial boating by being the first to develop, install, and use hydro-jet pumps in a boat in the United States. Jerry’s Rogue Jets became the first commercial jet boat tour company in the USA and set the standard for commercial jet boat tours. The company continues today as a world class nature based excursion on the Rogue River and a great tourist destination on the Southern Oregon Coast.

The Rogue River is notoriously shallow and rocky, and Hydro-jet technology allowed boats to safely travel in just inches of water while carrying a full load of travelers. With the advent of the hydro-jet, components of the propulsion system no longer protruded below the bottom of the boat. A hydro-jet draws water in through an intake mounted flush to the bottom of the boat, and then forces the water out through a nozzle mounted on the transom of the boat, which propels the boat forward. Steering is accomplished by directing the water nozzle to one side or the other. The hydro-jet was a major factor in revolutionizing jet boating on the Rogue River.

Each of the brothers played an integral role in the development of Jerry’s Rogue Jets. Jerry embodied the entrepreneurial spirit and brought the idea of jet boat tours to life. Jerry served as jet boat pilot, entertainer, tour guide, and recreational therapist. His wife Evelyn ran the office and took care of the daily bookings. Alden Boice was a boat builder and master mechanic. He built and maintained the original fleet of jet boats, the ‘Miss Kelly’ & ‘Carrie G’, which had wooden hulls and two engines each. Court, the oldest of the brothers, served as a jet boat pilot alongside his brother Jerry. Jerry, Alden, and Court Boice are the ‘Founding Father’s of Jerry’s Rogue Jets and commercial jet boat tours in the United States.

Jerry’s Rogue Jets set the standard for the jet boat tour industry. The Rogue River jet boat tour was designed as a careful blend of adventurous jet boating, nature based tourism, and unscripted educational/historical/comedic entertainment. Three distinct factors led to the success of the company: The addition of a public address (P.A.) system on the boat allowed Jerry and Court to weave tall tales and share the rich history of the Rogue River with their passengers, Alden built the fleet of new jet boats incorporating attributes of both performance and load carrying hull design allowing for a more pleasurable and exciting jet boating experience, and Jerry’s Rogue Jets operated for the sole purpose of introducing and entertaining travelers to the Rogue River. The goal of a commercial jet boat pilot on the Rogue River, then and now, is to instill the love and appreciation of this natural environment with each and every traveler. 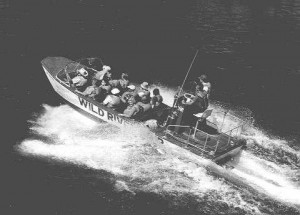 The original Rogue River jet boat tour traveled 32 miles upriver to the town of Agness and was known as the 64 mile round-trip. The boat would take a lunch break at one of the Agness lodges before returning downstream to Gold Beach. In the mid 1970’s adventurous boatmen began testing their nerves in the 20 mile section of river upstream from Agness. In this section the river becomes rocky, narrow, technical, and begins to form whitewater rapids. It wasn’t long before boat pilots began testing themselves in these technical whitewater rapids and created new tours. Court’s Whitewater Trips, owned and operated by Court Boice (a nephew of Jerry, Court, and Alden) was one such company that began offering trips into this section. This trip later became known as the 104-mile and quickly became the most popular trip on the Rogue River. In 1979, Court’s Whitewater Trips merged operations with Jerry’s Rogue Jets. The addition of a whitewater trip helped bolster the popularity of jet boat tours on the Rogue River.